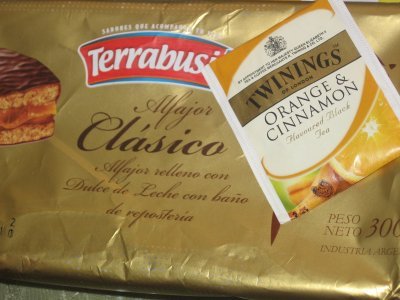 : Twinings tea has had heavy representation here on Tea Amigos for good reason: they got a lot of blends and they’re a big name tea company with their tentacles wrapped around the globe. Dax got a chance to shake hands with one of these Dominican tentacles when he was in Puerto Plata. When he came back and dropped some Twinings tea on my desk as a souvenir I was like “man, you didn’t have to go to the land of toilets that flush clockwise to bring back some readily available Twinings tea.” I’m wrong because there are some blends unique to other lands. One of them is Twinings Orange and Cinnamon tea, which tastes pretty much exactly as you would expect it to.

A solid daily drinker, no doubt. The taste isn’t exquisite but it’s a solid, almost generic black tea base with a healthy hint of orange spice to give it that kick. The packaging is also distinct from US Twinings packaging because the teabag is wrapped inside the outer satchet. US satchets contain the teabag on the inside. Finally, this Twinings Orange & Cinnamon tea has the following words enscribed, making this quite official: By Appointment to her Majesty Queen Elizabeth II. Suck on that.

: Another hard to find Twinings tea review comes your way by the name of Twinings Orange and Cinnamon Black tea. I already know that the teasan inside you is dying to find out if Twinings can do flavored tea better than the likes of Hyson. Although Hyson flavored tea has some stunning examples of quality and finesse (check out Hyson Cherry Lift or Apple Jazz), I believe Twining’s flavored tea has a bit more crispness to them. Hyson hits you with a Louisville slugger, while Twinings stabs you with a Ginsu. TheirOrange and Cinnamon tea has a great black tea base and even better orange essence. It smells like the orange and cream popsicles. It could have used more cinnamon in the mix, but hey, who’s counting. Actually, I’m counting…

1 comment Twining's Tea
You can follow any responses to this entry through the RSS 2.0 You can skip to the end and leave a response. Pinging is currently not allowed.
Add Comment