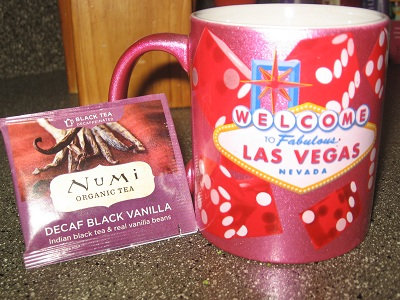 : Numi Decaf Vanilla Black Tea is about as good as any decaf tea will ever get. That being said, I’d rather just have a cup of Twinings. Man, nothing takes the wind out of the sails of a tea like decaffeinating it.

Numi Decaf Vanilla Black tea still packs a punch. The smell is delicious and you can tell that they used real vanilla, not the chemical flavoring that is about as effective as spraying on cologne after the gym and going out sans shower. That’s what I always think of when I drink artificially flavored tea. No, Numi doesn’t stoop to that level and deserves kudos. Hands down, this is the best decaffeinated tea I have ever lifted toward my mouf.

Rating: B
Rating for a Decaf Tea: A+

No comments Numi Tea
You can follow any responses to this entry through the RSS 2.0 You can skip to the end and leave a response. Pinging is currently not allowed.