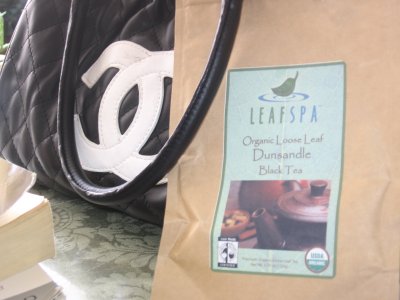 : Looks like we are brown-baggin it today as another LeafSpa organic loose tea hits the table. Named Dunsandle Black Tea, this teasan tool has me stumped on what Dunsandle really is. Rather than ask thy majesty Google, I’m going to make it up. If you were walking across the desert for 40 days and 40 nights like this story I once read, I’m sure your feet would take a beating. Kick off those wore down foot coverings and say, “now that’s a dunsandle”

Okay we got the meaning out of the way, it’s time for the taste test. Aromatic is its first name, and wholesome is its last. Dunsandle tea is quite tasty coming from the LeafSpa camp. It has a particular mesquiteability like an english breakfast tea, but leans more on the hickory side than the char-broil. The black tea base is grade A, with an aftertaste that is pleasing and hints at perfection. Daily drinker.

: Leafspa Dunsandle tea is the shiz but the question the lurks in everyone’s mind is what the hell isDunsandle? Before I was a teasan and really knew what it was I had a few theories. It’s the name of the ranch from Nickelodeon’s Hey Dude! It’s fashionable footwear currently a hit with hipsters. It’s the name of some mildly dangerous part of town where your grandfather used to go while playing hookey with his pals. Unfortunately, dunsandle is none of these things. Dunsandle tea is merely named after the Indian region which bears its name. Fancy that. The region itself is named after the British Lord Dunsandle who was governor.

History aside, I say that this Leafspa tea is excellent and I’d stake my reputation on it. This black Dunsandle tea has just a hint of mesquitability, while providing you that uber refreshing sensation that even the finest green teas cannot deliver like USPS.

No comments Leafspa Tea
You can follow any responses to this entry through the RSS 2.0 You can skip to the end and leave a response. Pinging is currently not allowed.