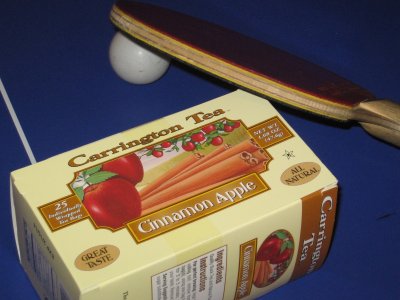 : Carrington Apple Cinnamon is not a bad blend when you consider that the packaging looks like it might contain poison or at least medical supplies. Beyond that, what you’re dealing with here is aCarrington Tea just poking its head above the daily drinker zone, but barely. Carrington Apple Cinnamon is quite enjoyable but you have to be prepared to feel a little parchness in the back of your throatosphere because this tea was dried extra desert. Nevertheless, the taste is worth it because it pleases the buds with them sweet apple cinnamon tastecles.

: Carrington Cinnamon Apple tea set a new benchmark for all Carrington Teas.  Carrying the torch, this apple cinnamon tea looks to bring you to a flavor country similar to a Cheerios variety.  Now I love me some Apple Cinnamon Cheerios, and sadly this tea could not come close.  It can be, however, a part of your complete breakfast. I didn’t expect much, and I could say the same about any tea that has packaging printed with a Commodore 64.  Carrington Cinnamon Apple has a little bit of quality in it though, as the apple poked its head out here and there.  The black tea base gave that weak sauce aftertaste like somebody skimped on good leaves.  Two bucks at Big Lots; what can you expect?

1 comment Carrington Tea
You can follow any responses to this entry through the RSS 2.0 You can skip to the end and leave a response. Pinging is currently not allowed.
Add Comment