No culture in the world is more renowned for their tea hustle than the British, who pretty much invented and perfected the teasan game. The first player to run the game was actually a female G, Catherine of Braganza, queen consort of Charles II. This is back in the 1660s and 1670s. She had the country on lockdown till the 19th century when India became part of the British Empire and the teasans of the continent gained access to all sorts of crop.

The unstoppable flow of history continued. During the British Industrial Revolution, tea consumption sky rocketed as British industrialists got their workers addicted to the beverage. The caffeine and sugar found in tea kept workers “motivated” to work more hours. At this time, private tea gardens were planted all over the world but remained under the auspices of British Gs. They quickly learned an important lesson: don’t get high off your own supply. 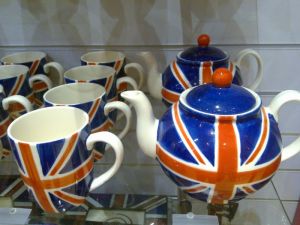 Everyone has some sort of tea consumption ritual, whether it’s sip sip pass or that you got to clear the teapot. British teasans how to orchestrate the tea hustle so their tea drinking follows a unique and distinct pattern or ritual. The OGs of the 19th century would set an empty teapot to boil. To warm it, some water would be splashed, swished around, and poured out. Then, teaspoons of India’s finest would be added to the pot, usually one teaspoon per person and an additional teaspoon for the pot. Then, fresh water was poured into the pot and allowed to brew to unleash the flavor. When it was time to pour, the participants would pass the teapot around in a circle, each pouring the tea into his or her own cup over a tea strainer. I, of course, am joking. Where are my manners? The classy host would pour all the cups of tea first, then hand them to the guests who could add sugar to or other taste-alternating chemicals. Dax and I think adding sugar to tea is pretty weak but we ain’t telling fellow teasans how to run their game. To each his own.

British tea culture has evolved over time to facilitate the ever-changing tea game. Brits consume 2.1 Kilos of the tea (street names: Chinese Ching Ching, the Indian Evergreen, the Darjeeling Green, the Asian Astroturf) each year. They don’t have time for the silly rituals mentioned above to get thier fix, so they have adapted to easy apparatuses such as tea bags. Tea breaks in the British work day are commonplace and institutionalized sometimes. In fact, the word tea has become synonymous with taking a break in work environments in the UK.

True British teasans begin experiencing withdrawl symptoms between 12:00 and 2:00. Afternoon tea, usually referred to simply as “tea,” is a common name for the meal that takes place around this time, regardless of the actual beverage consumed. They can call it what they want to call it but all teasans true and through from the corners of the world better recognize the forefathers of the teasan junket: the Brits.