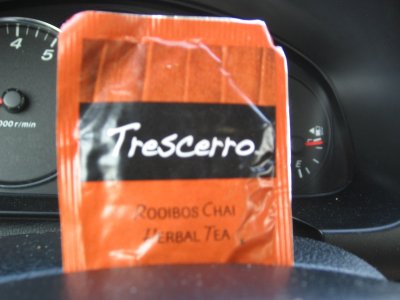 : Trescerro Rooibos Chai almost makes up for the fact that they appear to not own a web domain. Passing those elegant, elite tea brands that paid GoDaddy the dues needed to get some web space, Trescerro tea did some research, got in there and made some good policies, and came out with an uncorrupted triumphant landslide of flavor. I tasted some mighty fine rooibos tea in the mix, which by others is usually Aldi brand rooibos. Not Trescerro, they saved up and picked some goodness. The base tea was not as fine as one would like, but I would not expect that from them. They already hit me with this curveball of rooibos chai. No milk or cream added, as this was taken to the dome with authority.

: The true teasan has to be wary of rooibos tea from an unfamiliar brand like Trescerro tea. Rooibos tea is often done improperly using low grade herb with bogus flavor. Luckily, our homies at Trescerro stepped their tea game up yet again by producing this concoction: Trescerro Rooibos Chai Herbal tea. If you’re a fan of the rooibos, get your greedy paws on this brew and see if you like it because I did. Standard sweet rooibos taste with a lower chai focus than most. This is the 2nd chai rooibos tea, the other being Trader Joe’s Rooibos Chai. I don’t know which I like more because the other had more of a chai strut. Either way, Trescerro is proving to be a breeding ground for decent teas.

3 comments Trescerro Tea
You can follow any responses to this entry through the RSS 2.0 You can skip to the end and leave a response. Pinging is currently not allowed.
Add Comment