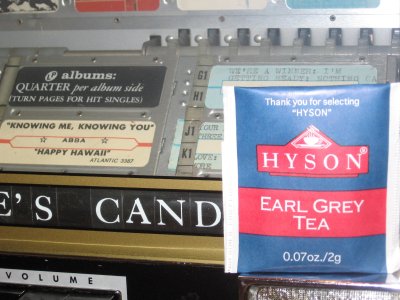 : Ok Hyson is trippin thinking that this is earl grey. It seems more like diet earl grey. Don’t get me wrong loyal fans, this Hyson ceylon tea still has that bold black tea base, but it applied for the wrong position this time. The bergamot concentration is dismal to say the least, and I really didn’t get that feeling in my nose like Zhena’s Earl Greater Greygives. Hyson earl grey is not what’s up, but is in no way a sore loser.

: I generally like my Earl Grey teas to be heavy on the bergamot and lighter on the blackness of the tea within. That’s why I dug the Earl Grey from Taylors of Harrogate, truly masterfully crafted. The Hyson Earl Grey, however, is lacking in finesse. It doesn’t have that silky smoothness necessary from prime Earl Greysand an overwhelming black tea sensation that stamps out the bergamotability. Furthermore, there’s somewhat of a strange, more citrusy taste that I would expect from the earl. It’s true, bergamot is a type of orange but normally this taste is eradicated from Earl Greys. Overall it’s got a certain funk I prefer to avoid. Sip at your own risk.

No comments Hyson Tea
You can follow any responses to this entry through the RSS 2.0 You can skip to the end and leave a response. Pinging is currently not allowed.