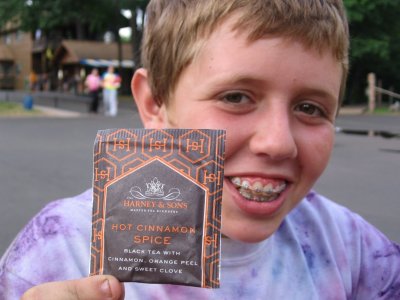 : Harney and Sons Hot Cinnamon Spice tea is the ultimate sweet herbal tea for the young, international jetsetter whose seductive character just swooped a lovely Dutch maiden in Rio. When said Cassanova runs out of champagne on ice what does he do? Steep Harney and Sons Hot Cinnamon Spice tea for two.
Harney and Sons tea has a reputation to uphold and it certain maintains this esteemed status, one sip at a time. Hot cinnamon spice is neither naughty, nor nice, not best served with ice, and not the kind ofherbal tea that you steep and think twice. It’s just pure cinnamon goodness with the sweetness of molasses and the demeanor of a princess. Cop a little for your sweetheart to brighten her day.

: Mike and I got on the steep n’ share program with this herbal tea from Harney and Sons. I don’t know why I expected this hot cinnamon spice tea to be lame, but let me tell you it is able-bodied like an Olympian.Harney and Sons hot cinnamon spice tea is a full fledged champion and lives up to the brand name. My palate expected and thin, wussy cinnamon tea but got smacked into shape by a wonderful sweetness and full-bodied texture. It’s way sweeter than Tadin cinnamon tea, and even makes sweet tea look like a washed out pro. Harney & Sons tea got their game on lock, try this one.

No comments Harney & Sons Tea
You can follow any responses to this entry through the RSS 2.0 You can skip to the end and leave a response. Pinging is currently not allowed.