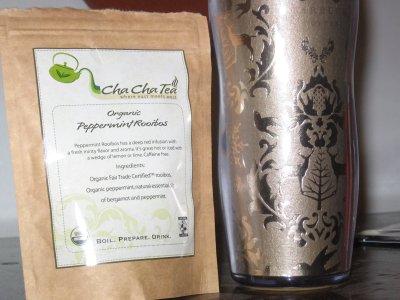 : Cha Cha peppermint rooibos tea was extra heavy on the peppermint tea, and feathery light on the rooibos. I’ve had the pleasure of steeping someCha Cha Tea previously and was not disappointed with the ingredient quality. The texture is felt with impressive authority, I almost can classify it as a “soft drink”. It’s just got that very prominent presence. The everlasting mint breeze in your mouth is a very delightful experience, and is only comparable toIntelligentsia Morroccan Mint. Thumbs up to this Cha Cha, as they lay a smooth rooibos blanket to host a mint picnic.

: Well there’s a new brand of tea in town, Cha Cha Tea and it’s not some wee beta nonsense you’re used to. Cha Cha Peppermint Rooibos is alpha, dealing hard blows with a deadly jab jab cross hook cross jab uppercut combination that will leave you bloodied on the floor if you dare challenge its supremacy. Simply put, this is one of the best rooibos teas I have ever tried and the best mint rooibos combination I have encountered. Fresh, decisive, dangerous. Don’t fudge with it.

No comments Uncategorized
You can follow any responses to this entry through the RSS 2.0 You can skip to the end and leave a response. Pinging is currently not allowed.