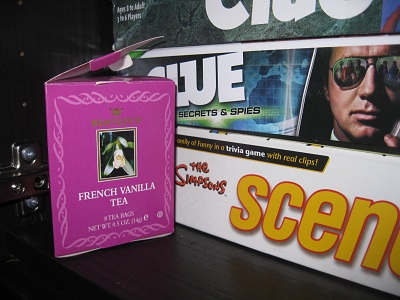 : Among French Vanilla flavored teas, there are champions and there are bench warmers.  Bentley’s French Vanilla tea is the latter.  This Bentley’s tea just tastes uninspired, like it was designed under the auspices of generic tea corporation rather than the watchful eye of a teasan or a Level III tea master, at least.  The black base tea has no character to give this tea a solid foundation.  The French vanilla flavor feels like an afterthought and tastes artificial.  Come on, you can do better than this!

Bentley’s French Vanilla Tea was a breath of fresh air today. Sitting alongside some freshly cut cantaloupe  Bentley’s French Vanilla came correct. To be honest, I wasn’t expecting much in the field of vanilla flava, but lo and behold there was nothing lo about it. The entrance is crisp, signifying not only a good leaf, but also a perfect steep timing. My first sips were heavy in the caramel department, accurately reflecting the colors in my cup. As I steeped on, the luxurious, caressing texture seemed to die down, resulting in an above-average black tea.

Overall, Bentley’s French Vanilla tea would make a good daily drinker for those looking for a touch of nuttiness in their afternoon tea, though you may not find in your favorite boulangerie.

No comments Bentley's Tea
You can follow any responses to this entry through the RSS 2.0 You can skip to the end and leave a response. Pinging is currently not allowed.